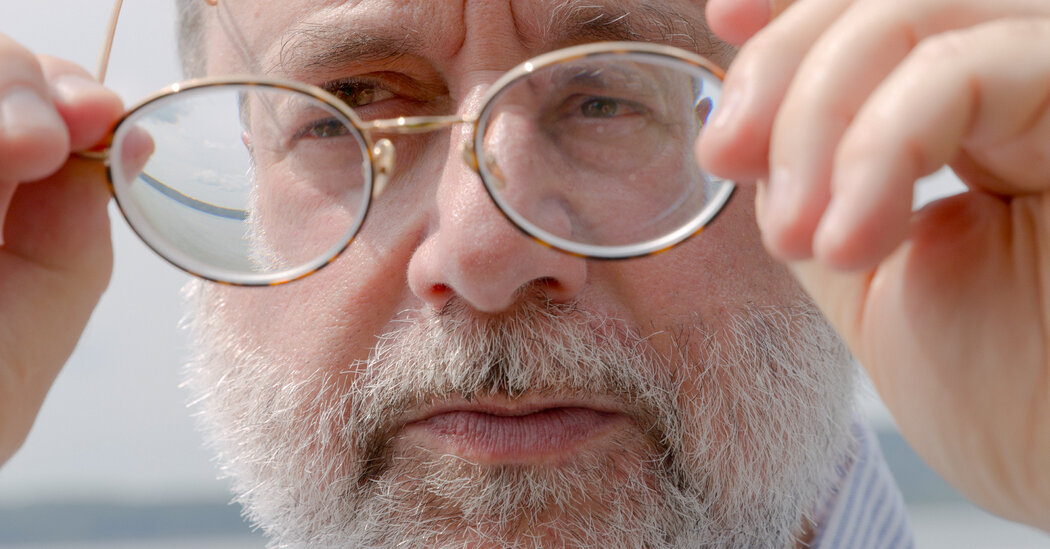 Our cross-country drive last winter from New York to Lake Tahoe was going to be eventful enough, with a pandemic, blizzards and the cancellation of salads at McDonald’s. But by Omaha, when the lanes on Interstate 80 seemed to be bouncing around before my very eyes, we entered unexpected territory.

“Are you practicing your slalom turns at 80 miles an hour?” my wife asked.

Road conditions were normal. Our S.U.V. had new tires. But the lanes often seemed to blur together. Sometimes the melding of lanes occurred late in the day, sometimes early. Sometimes in blinding sun, sometimes in fog. If I closed one eye, the lanes became separate again.

What was happening? I’d worn glasses for nearsightedness since fifth grade; I’d seen my eye doctor within the year; my prescription was current.

When we reached Tahoe, I went to an optometrist before even unpacking my skis. She said my eyes were fine, but advised an M.R.I. to rule out a brain bleed or a tumor. Days later, it did.

She also told me to see a neuro-ophthalmologist, an increasingly rare subspecialty. Nationally, there are only about 600 of them, and because many do academic research or have general ophthalmic practices, just 250 of them are full-time clinicians. In six states, there are none practicing, according to a paper in the Journal of Neuro-Ophthalmology last year.

The Tahoe optometrist warned it could take months to obtain an appointment with one of the few practitioners in the area. But my brother, a surgeon at Stanford, helped me get an appointment at Stanford Medical Center, four hours away, in Palo Alto, Ca., the following week. Dr. Heather Moss conducted the 90-minute examination, taking measurements that included the degree to which my eyes were properly centered.

My diagnosis: esotropia, which means inward turning of either or both eyes.

When Dr. Moss positioned a bar of triangular plastic in front of either eye, the bouncing stopped. The piece of plastic was a set of prisms, differing in strength from top to bottom. She alternated prisms until we got it right.

Wayward eyes can turn outward or upward or downward. All are forms of strabismus, and double vision is the chief symptom in adults whose brains are used to receiving two slightly differing images. (Without those, you wouldn’t have depth perception or be able to see in 3-D.) Somebody with symptomatic strabismus gets the two images. But they’re out of whack because the eyes are misaligned, and the brain doesn’t compensate for the anatomical-mechanical defect.

Typically congenital, it is most often diagnosed in children, whose symptoms present themselves in a “lazy eye,” because the brain suppresses images from the weak eye. Some children wear an eye patch over the strong eye, to retrain the lazy eye. Many children undergo surgery to reposition the muscles controlling the weak eye.

Strabismus is derived from strabos, the Greek word for “squint,” which aptly describes the reaction by adults who compensate for the defect by closing either eye. Doing so vanquishes the conflicting binocular images from both eyes, which the brain can’t overcome.

About 4 percent of adults have it, according to the journal Ophthamology. But it often goes undiagnosed and people unwittingly live with imperfect vision. “Most regular ophthalmologists are just looking at the eyes — not eye movement,” said Dr. Marc Dinkin, a neuro-ophthalmologist at Weill Cornell Medicine in New York.

Larry Frohman, a professor at Rutgers New Jersey Medical School and executive vice president of the North American Neuro-Ophthalmology Society, said the specialized field attracts fewer doctors because it requires an additional year of formal training beyond neurology or ophthalmology.

While surgery is sometimes the solution to this misalignment in adults, prisms are the common remedy. They can be permanently ground into lenses, displace light and shift the position of what an eye sees, tricking the brain into interpreting images from both eyes into proper alignment.

Choosing the right degree of correction can prove difficult. Prisms range in strength from 1 to 40 diopters (1 is weakest), though they rarely are prescribed beyond 15 because of the distortion they can create.

Dr. Moss recommended that I try temporary Fresnel press-on vinyl lenses, which use water to attach to the inside of glasses. These one-millimeter-thick lenses allow patients to experiment with different strengths. The hassle is that they can fall off, and the plastic, which contains thin etched lines on the surface, isn’t as clear as ground-in prisms. I tried a 1-diopter lens and then a 2-diopter, before settling on 3-diopters for the next three months.

Driving was no longer harrowing, but my vision was far from perfect, and even seemed to regress a bit. When I returned to the East Coast, Dr. Dinkin at Weill Cornell took over my care. In his examining chair, I finally experienced double vision.

When a large “A” was displayed on the wall and I removed the Fresnel lens on my glasses, I saw two A’s. When I looked through his hand-held prism, the A’s magically merged. What I had described as bouncing images on Interstate 80 were really separate images that my brain was trying to fuse. I didn’t think it was double vision at the time because the middle driving lane looked pretty much the same as the left lane. In fact, I was seeing two left lanes.

Dr. Dinkin increased the strength of my prism to 10 diopters. He divided the prisms into lenses for both eyes — 5 and 5 (with light being deflected in different directions). By late spring, Dr. Dinkin said it was time to put the correction in a pair of permanent lenses.

The new glasses worked well, though another issue arose. Lenses with permanent prisms are thicker along the edges, with the resulting distortion producing the effect of a fun house mirror. It’s especially problematic walking down stairs. So I got another pair of glasses, with slightly weaker prisms — 4 and 4 diopters. I’m trying to use those most of the time, reserving the 5-and-5 glasses for driving or when I otherwise need a vision boost.

How did I wind up with a diagnosis of strabismus in adulthood? Dr. Dinkin and Dr. Moss agreed I have probably had it all or most of my life, although the misalignment of my left eye is almost imperceptible. No doctor had detected the problem before because nobody had been looking for it, and I had voiced no complaints. My eyes themselves had not shifted in position. The symptoms of this condition had emerged with age and fatigue.

My vision misadventure was just another of the perils of getting older. Near the end of our stay in Tahoe, I had my first serious ski fall in 20 years, resulting in sprains to my left thumb and right shoulder. No big deal — those get better with ice, rest, a splint and 15 weeks. But together with my eyes, I began to wonder about my long-term odds. It’s a good thing I’m not a racehorse.