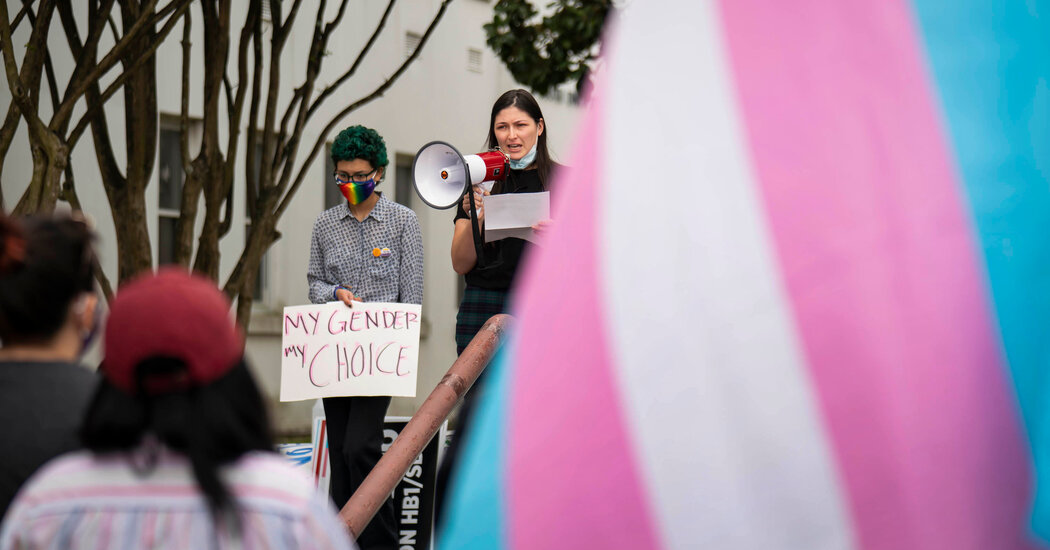 Alabama lawmakers voted on Thursday to criminalize medical care for transgender young people who are transitioning, adopting some of the nation’s most restrictive language and threatening doctors and nurses with up to 10 years in prison.

The legislation was approved as conservative lawmakers across the country have focused attention on transgender people and other L.G.B.T.Q. issues. They have pursued an array of bills aimed at limiting what doctors call gender-affirming care, restricting what students are taught in the classroom about gender and sexuality and barring some transgender students from participating in school sports.

On Thursday, Alabama lawmakers also advanced legislation that would require students to use restrooms and locker rooms for the sex listed on their original birth certificates. It also included an amendment that would restrict classroom discussions on gender and sexuality in kindergarten through fifth grade — a version of what critics call a “Don’t Say Gay” measure that goes further than some other states.

But the bill on medical care has emerged as one of the farthest-reaching, as it would make it a felony to prescribe hormones or puberty-blocking medication or perform gender-affirming surgeries. It also would not allow educators and school nurses to “encourage or coerce” students to withhold from their parents “the fact that the minor’s perception of his or her gender or sex is inconsistent with the minor’s sex.”

Gov. Kay Ivey, a Republican, has not said whether she will sign the legislation. Her office did not immediately respond to a request for comment.

The measures have been condemned by the transgender community as well as the medical establishment. In recent years, other states have considered, and in some cases approved, legislation aimed at thwarting doctors and nurses from providing gender-affirming care for young people, although none have created a felony-level offense.

Critics of the Alabama bill also contend that it could prompt lawmakers in other states to pursue such restrictions. “It’s a fearmongering attempt, but it’s spurring other states to go to very extreme lengths,” said Shelby Chestnut, the director of policy and programs for the Transgender Law Center.

Supporters of the legislation — named the “Vulnerable Child Compassion and Protection Act” — contend that the measure was intended to safeguard children. In the bill, the sponsors argued that “minors, and often their parents, are unable to comprehend and fully appreciate the risk and life implications, including permanent sterility, that result from the use of puberty blockers, cross-sex hormones, and surgical procedures.”

“Their brains are not developed to make the decisions long term about what these medications and surgeries do to their body,” Wes Allen, the Republican lawmaker who introduced the legislation in the State House, said during the debate over the bill on Thursday.

The American Medical Association has assailed these kinds of measures as “government intrusion into the practice of medicine that is detrimental to the health of transgender and gender-diverse children and adults.”

In a letter to the National Governors Association last year, the organization said that transition-related care was medically necessary and that forgoing it could have devastating consequences, as transgender people are up to three times as likely as the general population to report or be diagnosed with mental health disorders and have a heightened risk of suicide.

Some activists fear that these measures could intensify the risk.

“We’re going to see more and more of our children pull away,” said T.C. Caldwell, the community engagement director for the Knights and Orchids Society, an organization in Selma that provides resources to transgender youth. “I worry about people moving away. Alabama is home. This is home for so many of us who don’t want to leave and many of us who can’t afford to leave — who shouldn’t have to leave.”

Well over a dozen states have considered legislation in recent years looking to block gender-affirming care for young people. Last summer a federal court blocked Arkansas from enforcing a law that made it the first state to prohibit doctors from providing gender-confirming hormone treatment, puberty blockers or sex reassignment surgery to anyone under 18 years old.

In Arizona, Gov. Doug Ducey signed legislation last month blocking some forms of gender-affirming care for minors. Tennessee legislators also approved a bill this year that would ban providing hormone-related medication to children before puberty. But those measures stop short of being considered felony-level offenses.

Lawmakers in Idaho are considering legislation that is even more restrictive, making it a crime with a penalty as severe as life imprisonment for parents to seek gender-affirming health care for their children, even if they did so by going out of state. The bill has passed in the State House.

“If we do not allow minors to get tattoos, smoke cigarettes and drink alcohol or sign legal contracts,” said Bruce Skaug, the Republican lawmaker in Idaho who sponsored the legislation, “why would we allow them to make decisions to cut away organs based on their feelings during puberty time?”

The flurry of legislation and debate in state capitols represents the most significant push by groups opposed to transgender rights since the national campaign to limit bathroom access in 2017 and 2018.

The Push to Restrict Rights for Young Transgender People

A growing trend. Measures that could tranform the lives of young transgender people are at the center of heated political debate across America. Here is how some states are approaching the subject:

Indiana. Gov. Eric Holcomb, a Republican, vetoed a bill that would have banned transgender girls from competing in school-sanctioned girls’ sports. The governor said the bill, known as H.E.A. 1041, would likely have been challenged in court.

Utah. A day after the decision in Indiana, Gov. Spencer Cox, also a Republican, vetoed a similar bill that would have barred young transgender athletes from participating in girls’ sports. Republican legislators subsequently voted to override the veto and enacted the legislation.

In February, Gov. Greg Abbott of Texas ordered state agencies to investigate parents for child abuse if they provide certain medical treatments to their transgender children — an effort that was temporarily halted last month by a court order.

Several states, including Alabama, have also prohibited transgender students who compete in interscholastic competition to play on teams that correspond with their gender identity.

In late March, Gov. Ron DeSantis of Florida signed into law a measure banning public-school teachers in some grades from instructing students on sexual orientation or gender identity. The law has inspired legislators in other states to consider similar measures, called “Don’t Say Gay” by critics. Ohio lawmakers have introduced a measure that mirrors Florida’s. And in Texas, the lieutenant governor said this week that he intended to make such a measure a priority.

Advocates for the transgender community argue that the legislation and the surrounding rhetoric endanger children who are already vulnerable as they struggle with their gender identity.

“Puberty is hard enough,” said Felicia Scalzetti, an organizer with Hometown Action, an advocacy group that has protested against the legislation. “Imagine going through it while feeling out of body.”

“Visibility is important,” they said. “Kids have to be able to see themselves without fear of retribution.”

As Alabama lawmakers considered the gender-affirming medical care bill, they heard emotional testimony from at least one person who expressed regret over transitioning, as well as from others who argued that lawmakers stood to punish doctors and nurses they credit with providing care they considered essential and lifesaving.

“You’re asking me to some day put handcuffs on these people that are heroes in my life and arrest the people that saved my daughter,” David Fuller, the father of a transgender daughter and a police officer in Gadsden, Ala., told lawmakers during a hearing. “Please don’t ask me to do that.”