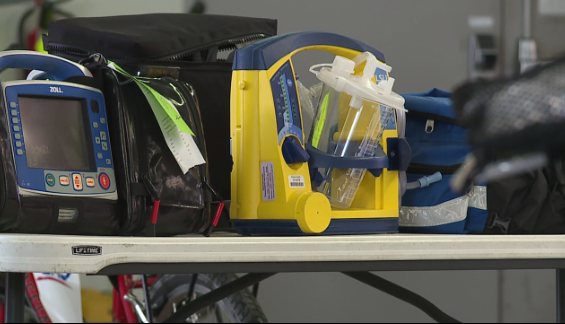 SPEEDWAY, Ind. — Medical crews are gearing up for the Indy 500 as it returns at full capacity in just three days.

Staff from several different healthcare providers, including Indianapolis EMS (IEMS), Indiana University Health and American Medical Response (AMR) will be on hand to help with the efforts to provide medical aid to anyone who might need it.

“This is a busy one for us for us, you know. This is something that everybody marks on our calendars,” said Dr. Dan O’Donnell. “It’s been a little different over the last couple years, but now we’re going to be full throttle coming up to race weekend.”

O’Donnell, who serves as Chief of IEMS, said their staff have been working with the Indianapolis Motor Speedway (IMS) and the healthcare providers who take part in the race, to ensure that care is seamless for spectators both inside and outside the track.

Not only will IMS be back at full capacity, with room for more than 300,000 fans for the first time since 2019, but the Indy 500 Snake Pit will return, welcoming back tens of thousands of fans for the race day concert.

“It’s always a fun time and people ask us, how’s the weather? I say, well it rains and then it’s hot, so that’s what you get,” said Andy Myers, in town from the Akron, Ohio area for his 20th Indy 500.

If we’re talking about this year, Myers hit the nail on the head. After a rainy few days, temperatures are expected to warm up, reaching near the mid 80s on Sunday for the Greatest Spectacle in Racing.

Medical staff know that means potential for a busy day and each play a role in making sure that if a spectator or someone participating in the race needs medical support, that there are no stones left unturned.

IEMS will also be a part of the medical team working inside the field hospital in the Snake Pit on race day. It’s one of two, in addition to IU Health’s infield medical center, that will be operating for people who need care.

The IU EMS Fellowship program will also take part in assisting the field center by helping to staff it.

“In the Snake Pit hospital, it is a hospital. We’re going to have the ability like most emergency departments to treat minor to major injuries and illness,” said O’Donnell.

Anything major would be a matter of stabilizing a patient and then transporting, said O’Donnell.

O’Donnell said people tend to be misled by cooler temperatures as they arrive in the morning and said he can’t overstate how important it is to stay hydrated ahead of time and throughout the day.

“I suspect as the sun really starts getting up there around 11 o’clock we’re going to be busy, really until the race is over and we know that going in,” O’Donnell said.

He encourages people take care of not only themselves, but keep an eye out for their friends and family members they may be attending with. Their top goal, O’Donnell shared, is to be able to help enhance people’s experience and make sure they can continue enjoying the day as long as they aren’t experiencing any major injury or illness that requires transport.

“Again, no one’s here to get anyone in trouble. We want to make sure we take care of folks and address any emergencies early on,” O’Donnell said. “It doesn’t mean we’re going to ship you out and you’re gonna miss your good time. If you get there and get cooled down, we can do an assessment and make sure there’s nothing else going on and let you get back to the activities.”

In 2019, where temperatures topped out at only a few degrees hotter than what is expected for Sunday, there were around 110 people transported from the Snake Pit.

Around the race track, there will be free hydration stations and cooling stations for people to take advantage of that are well-marked.

On top of services for people attending the concert, there is a second field hospital run by IU Health Staff.

Earlier this year, IU Health said it partnered with IMS to upgrade the infield care center. Not only was it remodeled structurally, but it now has all brand new patient beds, new code carts, new nurse server carts, a new disposable curtain system and new vital sign machines. Monitors and AEDs were upgraded, while an additional EKG was added. That’s just the start.

Also on hand for Sunday will be a trauma surgeon, neurosurgeon and orthopedic surgeon from IU Health. That just scratches the surfaces for the level of care available on race day.

There will be six IU Health track surface ambulances available to respond to the track for racing crashes and 20 spectator ambulances on site for spectator care. A spokesperson for the healthcare system said staffing for the ambulance services and 15 first aid stations around the property include about 125 medics and paramedics from AMR. 10 additional medics, who will handle incidents that occur in the pits, will also be on hand.

IEMS said it operates in an all-hands-on-deck capacity on race day, but that people who are usually off will typically work overtime to help ensure they can staff the race, and still provide quality care for people in need of services across Indianapolis.

“We have a city to take care of. This big race is going on, I know they’re their own city there, but we still have our citizens and visitors going about their normal Sunday on a holiday weekend,” said O’Donnell.

He shared that IEMS will shift some ambulances that are in service towards the track in case it is needed for additional help transporting patients.

Because IEMS is responsible for making sure people outside the track also have medical care if needed, their staff will be on site and ready to go starting Friday night.

“We will have a medical presence out there, to make sure they stay safe and are taken care of,” said O’Donnell.

There will also be a command center set up on Georgetown Road near the Coke Lot, where staff will be on hand to help people camping out or just out there for the festivities.

“There will be a command center where we’ll be deploying our paramedics and we’ll have paramedics and EMTs on carts so they can navigate through the Coke Lots and fields,” said O’Donnell.

Those staff will respond to any calls for assistance in that area.

“The goal is to kind of evaluate folks, treat minor injuries if we can. We’ll have two physicians there on Saturday night to do some minor treatment if need be,” O’Donnell said. “We’ve gotten really creative in our way to provide medical care in those camping lots.”

With so many people coming from out of town, he said the goal is to be able to provide care for people, so that nobody needs to take a trip to an emergency room for something that can be evaluated and treated by their team.

“On a race weekend, it ebbs and flows, you know, if it’s a rainy race weekend, it’s pretty tame, there’s not much going on,” O’Donnell shared. “Generally, Saturday night is busier for us, there’s a lot more pedestrian traffic. A lot of people, not only the campers, but everybody coming to enjoy the experience the night before the race.”